The Oran Mor in Glasgow’s west end is quite a spectacular  venue, and it’s the perfect place for an artist like Gabrielle Aplin to play. Standing in the crowd, there are all types of people – old, young, male, female, and everything from sparkly dresses to corduroy bomber jackets. The mix of people proves how widely appreciated Aplin’s talents are.

Opening set from 18 year old Geordie, Sonny (@nowthisissonny on socials if you fancy a listen) was the perfect length to warm the crowd up, and keep their attention – with tracks such as ‘Princess’ and ‘Two to Tango’ he had the room singing along with him in no time

Gabrielle Aplin took to her glitter strewn stage bang on 9pm – none of this ‘keep them waiting an extra five minutes’ drama – and burst straight into her incredible, hour and a half long, packed set – kicking things off with bouncy track ‘Sweet Nothing’ from her second album ‘Light Up The Dark,’ followed by equally as bouncy, ‘Nightbus’ from recent EP, ‘Miss You.’ The audience were bopping along from the opening chord, and Gabrielle had every inch of everyone’s attention until she finished her set.

Completely honest with her fans from the offset, Aplin admits that she is extremely nervous to be back performing – especially as Glasgow is the opening night of her UK tour, however, had she not mentioned it, not a soul would have been able to tell. She held herself with confidence and did not waver a single note all night; the ‘lucky sparkly trainers’ appear to have done their job.

Fan favourite, and early single, ‘Panic Chord’ turned the Oran Mor into a choir room, and phones popped up from every direction to capture the track on video.

Gabrielle’s cover of ‘The Power Of Love’ was picked up a couple of years ago for the infamous John Lewis Christmas advert, and it’s clear the song still means a lot to her; slight changes to her original cover (that does make sense if you think about it…) could be picked out when she took to the piano, solo, without her band, and you could have heard a pin drop from the audience – literally, someone’s phone “pinged” and it sounded like it had come through a tannoy. With the crowd’s full attention, Gabrielle turned hers towards her track with artist ‘Salute,’ explaining that she’d been approached to help write on the track, and was lacking inspiration, when ‘good ole’ Piers Morgan cropped up with another of his ridiculous claims (the one where he decided that, because he can walk in a pair of high heels, women should have to wear them to work without complaining – but that’s a rant for another time). With punchy lyrics such as ‘you say I got too many views / and they don’t sit well with you / but that’s not up to you’ it is a perfect pop song, with a very important message.

The entire way through her set, Gabrielle comes across as a friend. It is obvious and understandable why so many look up to her as an inspiration; she shares that she’s reading her ‘F**k It’ book (that literally is the title, and it’s good – John C Parkin is the author if any of you are intrigued), and it sits particularly well with the Glaswegian crowd.

Before going on to play her current single, ‘Waking Up Slow,’ she asks that the crowd ‘let go of anything they’re worrying about’ for three minutes. She has everyone inhale a breath for four seconds, in unison, and exhale for eight, again in unison, which I thought was lovely; it brought such a calm, friendly atmosphere to a room full of strangers.

Aplin takes to the piano again to perform ‘Salvation.’ This is the definite highlight of my night. The track is from her debut album, and is gorgeous in a set of headphones, however hearing it live, and raw like it was performed is something else. The middle eight is particularly powerful, and again, even more so when experiencing it live – like a forcefield leaving the stage and making its way across the crowd, you could see the music captivating the whole room. 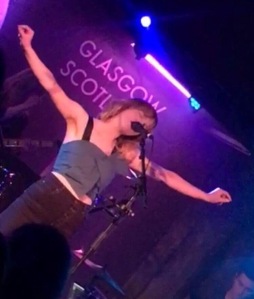 “Closing” her set with another recent single, ‘Miss You,’ left the crowd needing more, so Gabrielle took to the stage for her encore with ‘Stay’ and ‘Home’ – two tracks which compliment each other beautifully.

One of the most grateful artists I’ve seen – as she was leaving the stage, Gabrielle told us she was off to tell her mum that she’d played the show, and thanked the crowd no less than four hundred times (ok, slight exaggeration, but you get the idea) – if you haven’t seen Gabrielle Aplin live before, I strongly recommend that you get yourself along to one of her shows, and be prepared to be mesmerised – not just by the ‘lucky sparkly trainers.’